This February our campaign for a better City moved forward by building great momentum with endorsements from national and statewide leaders as well as labor unions, while we fought to make our City safer, technologically accessible, sustainable, and took a break from the campaign to celebrate Black History Month.

Support Our Campaign For A Better City:

Please join former Public Advocate Mark Green at the home of Bill Samuels at 7PM on Monday, March 11, at what we hope will be our final fundraiser. We've already raised $55K and only need another $30K to reach our spending limit in time for the March 11 filing deadline.

Endorsements for the "Progressive Candidate"

President Barack Obama’s 2012 New York State Director Rob Diamond has endorsed our campaign and is stepping up in our local race to bring what we brought to Washington back home to our district.  This followed another endorsement by a statewide figure, New Roosevelt founder and government reformer Bill Samuels who is dedicated to electing young progressive candidates like Senator Gustavo Rivera, the kind of candidates we need for a better City.  Former Public Advocate Mark Green lead the trifecta with his early endorsement on New Years.  You can watch their endorsements in Capital Tonight, The Capital, and on KallosForCouncil.com.

Endorsements for the "Labor Candidate"

We've quickly picked up the "labor candidate" label. With so few pro-labor candidates running, I am the only union-side labor attorney running for City Council and one of a handful who has ever served a union.  Our work with organized labor as a Chief of Staff in the Assembly, as Executive Director of New Roosevelt, and in the year since we launched our campaign has earned us endorsement letters from Amalgamated Transit Union (ATU) Local 1179, Boilermakers Local Lodge No. 5, Communication Workers of America Local 1101, and Utility Workers Union of America (UWUA) Local 1-2, which you can find at KallosForCouncil.com/Endorsements with coverage in Crain's Insider and the Daily News, and with many more to come.

We've also continued our trend as the only candidate to hold substantive events, with a discussion on "Labor and the 2013 Elections: Organizing for the 21st Century" featuring former Deputy Comptroller Barbara Mehlsack, a partner at Gorlick, Kravitz and Listhaus, P.C.  Video of the full discussion is available below or online at KallosForCouncil.com/video. 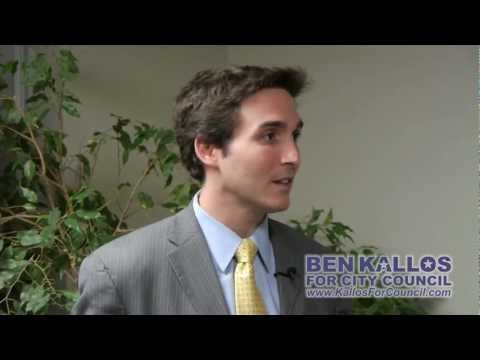 Tagged as the "Tech Candidate"

What if a free and and open source (FOSS) developer ran for office, say City Council?  What kind of "openness" and "freedom" could they bring to government?  As the only FOSS developer, or tech entrepreneur for that matter, running for City Council, we are asking just that.  We've emerged as the "tech candidate" with recognition in the Epoch Times and are sharing our vision for the City at OpenNY Meetup: State of Civic Technology w/ 2013 Goals & #NYTMvotes and Wikipedia Day Lightning Talk on wiki.NYC.gov.

As we strive to be "open" and "free," our campaign has always had an "open platform" where you can vote, comment, and suggest your own solutions.  The "open platform" solution to bringing openness and transparency to politics seems to have started to catch on.  Earlier this year, NY Tech Meetup, launched their own version, where many of our ideas have already been adopted and where we have posted more.  Please join the conversation on our open platform or on NY Tech Meetup. We pledge to adopt both.

Fighting to Keep Our Children Safe

We are already taking action to ensure safe public transportatin, with our initiative to "Bring Back the Booths."  We've continued the theme by supporting the drivers, matrons and mechanics of Amalgamated Transit Union (ATU) Local 1181 when they went on strike over the Employee Protection Provision (EPP). The EPP has kept our City's children safe with professionals who have the training and experience to get them to school safely every morning and evening day-in and day-out.  Our campaign is about more than just sign-on letters and introducing legislation that doesn't go anywhere, we are all about results.  We took to the streets by joining the picket line, marching across the Brooklyn Bridge with more than 7,000 brothers and sisters in organized labor to whom we then spoke at the rally, and were the only candidate or elected officer to call attention to an accident by a bus operator without the EPP, where 14 were injured including the driver, matron, and children.

Our campaign sent a complaint to the New York State Inspector General requesting the creation of an oversight body consisting of residents and an investigation into the “unprovoked” attack of 20-year-old Roosevelt Island resident Anthony Jones by members of the Roosevelt Island Public Safety Department, which was reported in the Daily News earlier this year.

Following our complaint, we added a "Share Your Public Safety Department (PSD) Stories" feature to our campaign site so that residents can share their stories, either publicly or privately, for submission to the Inspector General, Police, or Court.

We were also privileged to be the only City Council campaign to join the "Stop PSD Brutality Community Rally" where dozens of Roosevelt Island residents shared their stories of brutality at the hands of the officers of the Roosevelt Island Operating Corporation's (RIOC) Public Safety Department.  The stories were as shocking as they were numerous and we hope that our complaint before the Inspector General can be one of the solutions to finally remedy years of misconduct.

As the "tech candidate" I am thrilled to have Cornell NYC Tech being built on Roosevelt Island, which is in our district.  However, in keeping with our campaign's theme, "A Vision for the Future with the Experiece to Get It Done," we know that any new development must be "sustainable" by investing in the infrastructure necessary to support the new constituency it will bring.  At the February City Planning Commission (CPC)'s Public Hearing on the Uniform Land Use Review Procedure (ULURP) we were the only campaign for City Council to provide testimony, which you can read here. Our testimony called for: 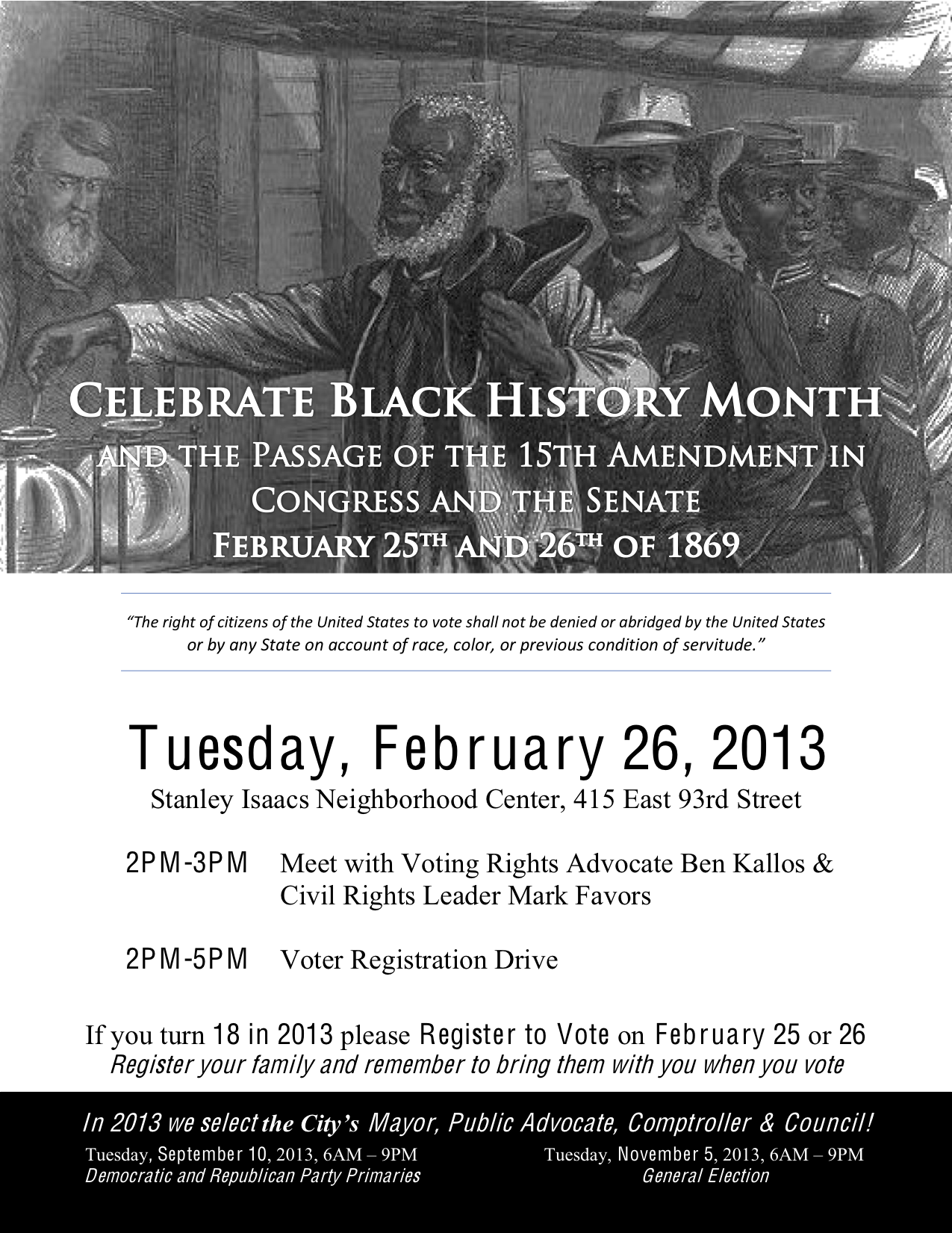 On February 26, we took a break from the campaign to celebrate Black History month and the passage of the 15th Amendment at Stanley Isaacs Neighborhood Center with Youth Employment Services (YES) and General Equivalency Degree (GED) program participants, along with local residents and seniors.  We presented a non-political and non-partisan  program on the importance of voting. I spoke in my individual capacity as a voting rights advocate, with Gabe Gallucci, an organizer for President Obama, and civil rights leader Mark Favors.  The presentation was followed by a voter registration drive, where volunteers registered new voters.

The 15th Amendment was passed on February 25th and 26th in 1869, in the month we now celebrate as Black History Month. This Amendment granted the right to vote regardless of race, color or previous condition of servitude. Our program was developed using materials from Vote18 and Rock the Vote, featuring Grammy Award winner John Legend, R&B singer Bridget Kelly, Glee's Darren Criss and blogger Perez Hilton.  Our featured speaker Mark Favors was the lead plaintiff in the lawsuit, Favors v. Cuomo, for fair redistricting in New York State, which was ultimately responsible for drawing the lines for Congress in 2012.
We've given this presentation at high schools, youth programs, and community centers throughout the City.  Please contact our campaign to request yours.

Please join Bill Samuels, former Public Advocate Mark Green, and more progressive leaders, to support our campaign for a better City. Help make this our final fundraiser. We've already raised $50K and only need another $35K to reach our spending limit in time for our March 11, 2013 filing deadline.