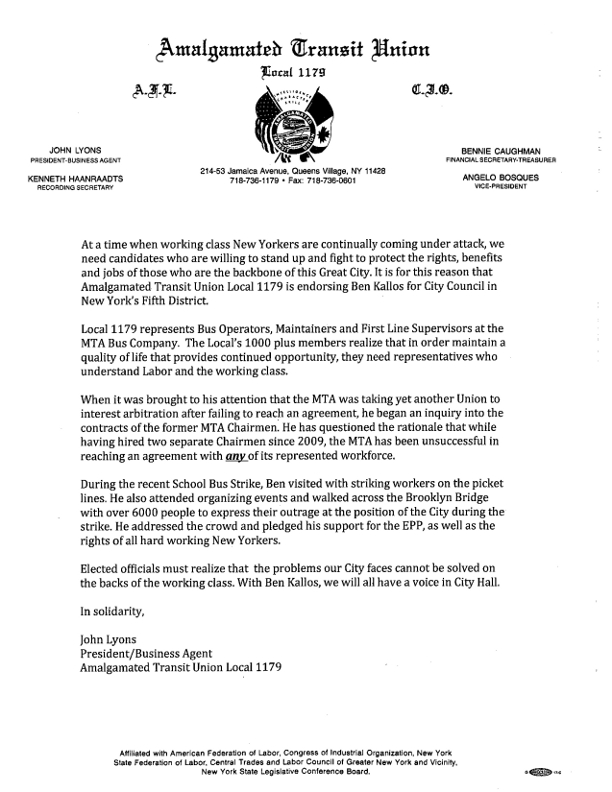 At a time when working class New Yorkers are continually coming under attack, we need candidates who are willing to stand up and fight to protect the rights, benefits and jobs of those who are the backbone of this Great City. It is for this reason that Amalgamated Transit Union Local 1179 is endorsing Ben Kallos for City Council in New York’s Fifth District.

Local 1179 represents Bus Operators, Maintainers and First Line Supervisors at the MTA Bus Company. The Local’s 1000 plus members realize that in order to maintain a quality of life that provides continued opportunity, they need representatives who understand Labor and the working class.

When it was brought to his attention that the MTA was taking yet another Union to interest arbitration after failing to reach an agreement, he began an inquiry into the contracts of the former MTA Chairmen. He has questioned the rationale that while having hired two separate Chairmen since 2009, the MTA has been unsuccessful in reaching an agreement with any of it’s represented workforce.

During the recent School Bus Strike, Ben visited with striking workers on the picket lines. He also attended organizing events and walked across the Brooklyn Bridge with over 6000 people to express their outrage at the position of the City during the strike. He addressed the crowd and pledged his support for the EPP, as well as the rights of all hard working New Yorkers.

Elected officials must realize that the problems our City faces can not be solved on the backs of the working class. With Ben Kallos, we will have a voice in City Hall.