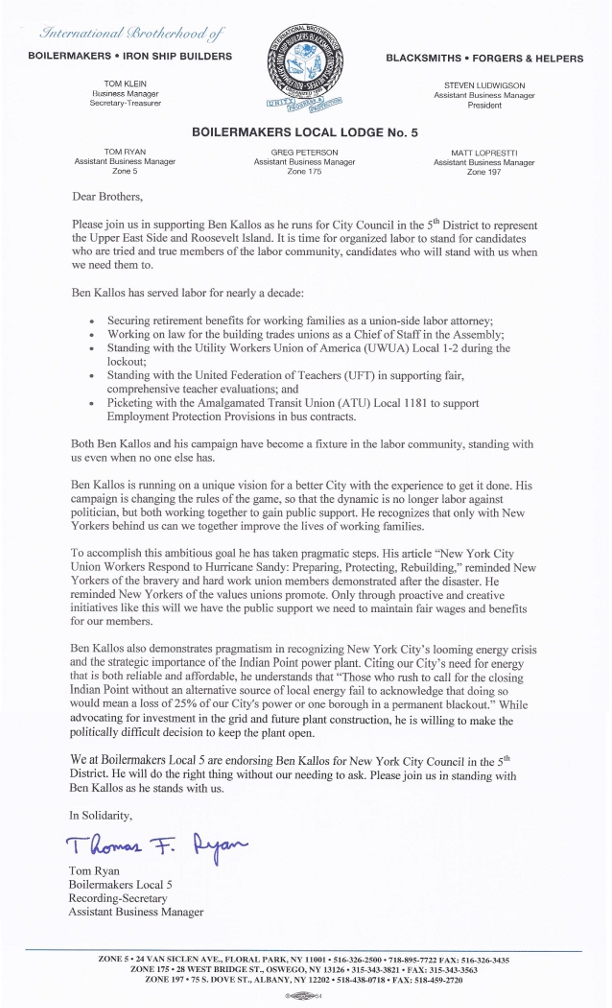 Please join us in supporting Benjamin Kallos as he runs for City Council in the 5th District to represent the Upper East Side and Roosevelt Island.  It is time for organized labor to stand for candidates who are tried and true members of the labor community and have become candidates.

For nearly a decade, Ben Kallos has been serving labor:

He and his campaign have become a fixture in the labor community, standing with us even when no one else has.

Ben Kallos is running on a vision for a better City with the experience to get it done!  His campaign is changing the rules of the game, so that the dynamic is no longer labor against politician but both working together to bring public opinion to support a sustainable City where working families can thrive.

In order to accomplish this idealistic goal he has taken pragmatic steps like authoring opinion editorials like “New York City Union Workers Respond to Hurricane Sandy: Preparing, Protecting, Rebuilding,” featured in the Huffington Post reminding New Yorkers of the bravery and hard work of union members prior to, during and after disasters like Sandy.  It is only through proactive initiatives like this that we will have the public support we need for the living wages and benefits.

With his vision comes the pragmatism to understand the reality of New York City’s looming energy crisis and strategic importance of the Indian Point power plant.  Citing our City’s need for energy that is both reliable and affordable, “Those who rush to call on closing Indian Point without an alternative source of local energy are failing to acknowledge that doing so would mean putting one of the boroughs into a permanent blackout!”  While advocating for investment in the grid and future plant construction, he is willing to make the politically difficult decision to keep the plant open.

We at Boilermakers Local 5 are endorsing Benjamin Kallos for New York City Council in the 5th District.  While many unions beg candidates to represent working families, Benjamin proactively reached out to us.  He will do the right thing without our needing to ask.  Please join us in standing with Ben Kallos as he stands with us.