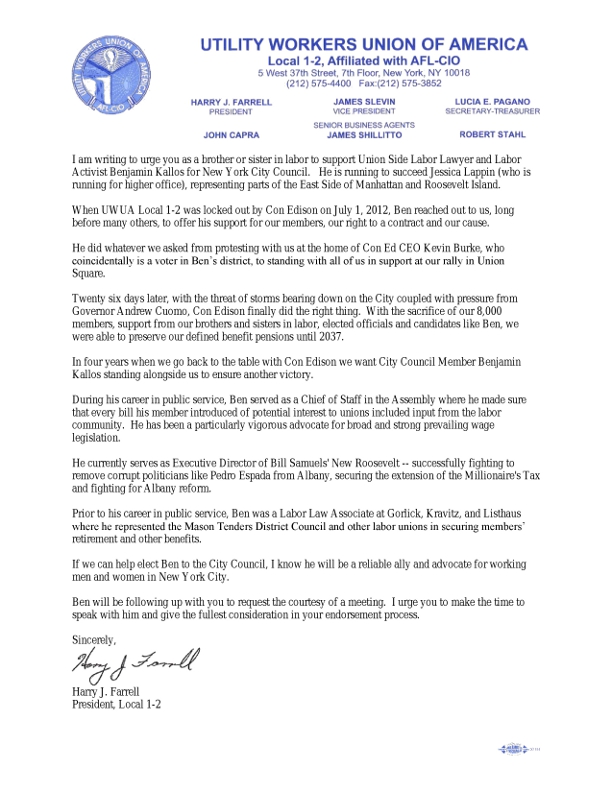 I am writing to urge you as a brother or sister in labor to support Union Side Labor Lawyer and Labor Activist Benjamin Kallos for New York City Council.   He is running to succeed Jessica Lappin (who is running for higher office), representing parts of the East Side of Manhattan and Roosevelt Island.

When UWUA Local 1-2 was locked out by Con Edison on July 1, 2012, Ben reached out to us, long before many others, to offer his support for our members, our right to a contract and our cause.

He did whatever we asked from protesting with us at the home of Con Ed CEO Kevin Burke, who coincidentally is a voter in Ben’s district, to standing with all of us in support at our rally in Union Square.

Twenty six days later, with the threat of storms bearing down on the City coupled with pressure from Governor Andrew Cuomo, Con Edison finally did the right thing.  With the sacrifice of our 8,000 members, support from our brothers and sisters in labor, elected officials and candidates like Ben, we were able to preserve our defined benefit pensions until 2037.

In four years when we go back to the table with Con Edison we want City Council Member Benjamin Kallos standing alongside us to ensure another victory.

During his career in public service, Ben served as a Chief of Staff in the Assembly where he made sure that every bill his member introduced of potential interest to unions included input from the labor community.  He has been a particularly vigorous advocate for broad and strong prevailing wage legislation.

He currently serves as Executive Director of Bill Samuels' New Roosevelt -- successfully fighting to remove corrupt politicians like Pedro Espada from Albany, securing the extension of the Millionaire's Tax and fighting for Albany reform.

Prior to his career in public service, Ben was a Labor Law Associate at Gorlick, Kravitz, and Listhaus where he represented the Mason Tenders District Council and other labor unions in securing members’ retirement and other benefits.

If we can help elect Ben to the City Council, I know he will be a reliable ally and advocate for working men and women in New York City.

Ben will be following up with you to request the courtesy of a meeting.  I urge you to make the time to speak with him and give the fullest consideration in your endorsement process.