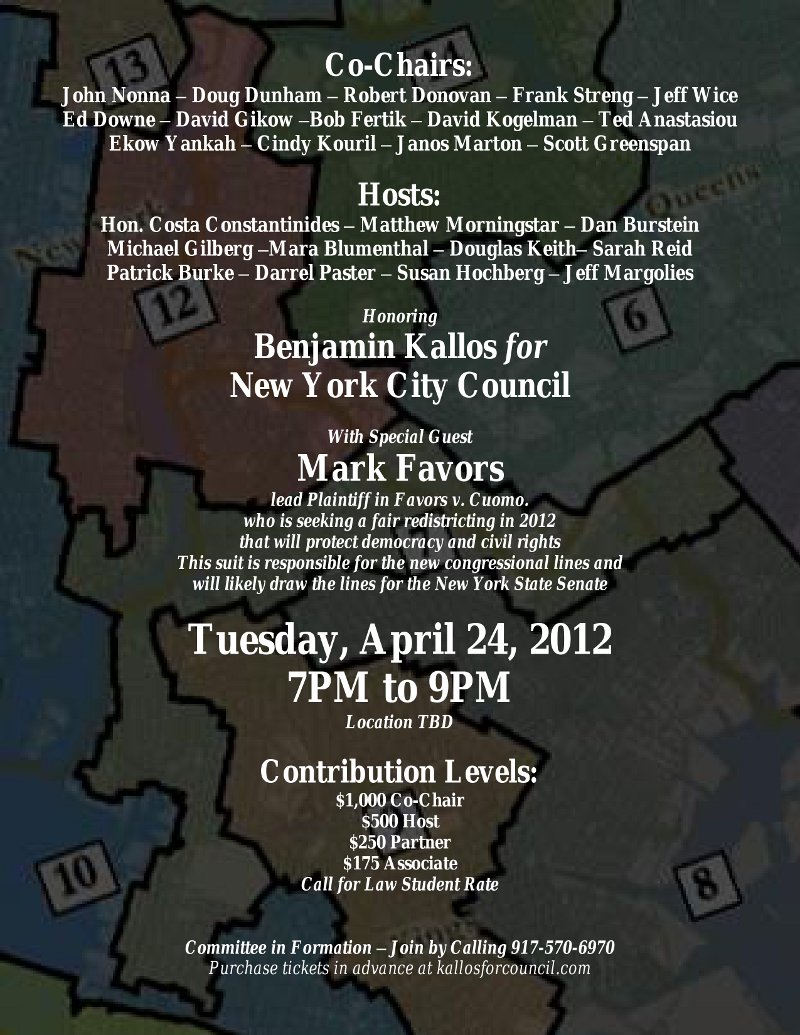 I’m not sure that I’ve ever seen a campaign fundraiser themed quite like this before, but New York City Council candidate Ben Kallos is holding a fundraiser (donation for co-chairs, $1,000) centered around a discussion of the redistricting lawsuit Cuomo v. Favors.

The “Redistricting Lawsuit Discussion in Support of Kallos for Council” is being held on April 24, location to-be-determined, and will feature “special guest” Mark Favors, the lead plaintiff in the lawsuit.

The theme seems a little weird for a fundraiser, but this isn’t totally out of left field. Kallos, who is running for Councilwoman Jessica Lappin’s seat (as she runs for Manhattan borough president), is executive director of Bill Samuels’ New Roosevelt Initiative. Recall that Samuels didnot exactly have a positive reaction to the way that the whole redistricting deal went down.

Kallos wrote in to say that though the fundraiser may be a bit unusual, he is trying to run a “substantive campaign about the issues that not only effect the district but the City as a whole.” He also noted that his first fundraiser was meant to help Second Avenue small businesses fighting to stay a float a midst the subway construction.

Here’s the info, which was just posted on Facebook:

With Special Guest
Mark Favors
lead Plaintiff in Favors v. Cuomo.
who is seeking a fair redistricting in 2012
that will protect democracy and civil rights
This suit is responsible for the new congressional lines and
will likely draw the lines for the New York State Senate

Committee in Formation – Join by Calling 917-570-6970
Purchase tickets in advance at kallosforcouncil.com