Happy New Year!  2012 was an amazing year, full of challenges to overcome, super storms and threats of apocalypse, unbridled success like the re-election of Barack Obama, landing the mars rover, discovering the Higgs Boson, and even sky diving faster than the speed of sound from space.  We enter 2013 in a world where more is possible than the year before.  What preconceived norms can we shatter in 2013?  I would love to know your New Year's resolution for how you will make the world a better place in 2013.

Please join me in celebrating the New Year with my new fiancee.  Over Thanksgiving we planned a trip to Belize, which has a nascent tourism industry with a strong base in ecotourism.  We stayed at Hidden Valley Inn and Reserve, which boasted over 7,290 acres of forest along with several waterfalls.  On Thanksgiving I arranged for us to have a waterfall all to ourselves.  Once we arrived I opening a box of Blue Morpho butterflies where I had hidden the ring.  In the witness of a dozen butterflies released as I popped the question, I asked, she cried then said yes.  Pictures from the trip are available for friends on Facebook.  We started our celebration with a champagne picnic and haven't stopped celebrating since.
I continue to be thankful for having her and people like you in my life.  Thank you for making me feel like the luckiest man alive every day.
Endorsement
We are starting the New Year off on the right foot with coverage in the Capital of our support from our friend and colleague former Public Advocate Mark Green who said in his video endorsement:

"Over the course of my public life as an elected official as a Public Interest Lawyer I've met and worked with hundreds of young  talent and I don't know many if any who quite combine the focus and creativty of Ben Kallos.  That is focus, meaning 'hey Ben did you do...? I did it yesterday Mark.' If you give him 10 things to do he will do 12.  This is very good in an elected official on your side.  We've all met people who are creative. Ideas flow out of him like words out of [President] Bill Clinton at a convention.  To combine this left brain and right brain skill would be enormously valuable to the East Side and for New York City. I am endorsing, enthuisiastically, Ben Kallos and I hope you consider doing so as well." -Former Public Advocate Mark Green 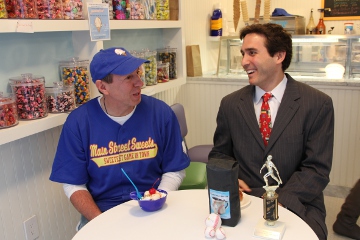 Coach Scott's Main Street Sweets is one of the first stores to open on Roosevelt Island's Main Street reversing the recent trend of store closings.  As a campaign we are committed to growing jobs in the district by supporting small businesses like Coach Scott's, so we paid a visit to join him on opening day.
Coach Scott's Main Street Sweets is bright and friendly, the perfect place to savor a cup of Lakehouse Coffee, grab bagel or croissant breakfast on the go, or to bring the entire family for some sweets including cherry vanilla, chocolate chocolate chip, strawberry, coconut, coffee and pistachio ice cream or lemon and black raspberry sorbet.
Like them on Facebook, visit their Website, and be sure to stop by!
Join Your Community Board
Community Boards are the local town halls for New York City, charged with representing community interests on crucial issues of development and planning, land use, zoning and City service delivery.  There are 12 in the Borough of Manhattan, 2 covering City Council District 5 and 59 spanning all of New York City.  Each board has 50 volunteer members generally serving staggered two-year terms, appointed by the Manhattan Borough President, with half nominated by City Council Members who represent the district.  If you have a specific interest such as liquor licenses or parks you can attend that specific committee and often become a public member.  You can learn more from my first appearance on Community Board 8 Speaks in May of 2010 where I discuss how to join or become a public member.  Applications are available from the Manhattan Borough President's office.
Seniors and Social Services
As a Public Member of Community Board 8 Manhattan's Communications Committee I maintain their CB8M.com website using open source technology to save the City of New York thousands a year and serve as the occasional host of Community Board 8 Speaks which is aired on MNN and hosted online for anyone to watch for free.
The most recent episode is the second part of our two part series on senior and social services with Lenox Hill where we focus on case management and legal services.  If you or someone you know is struggling with caring for loved one you can learn about FREE services available that can be helpful from meals on wheels to home care to rent payments.  Watch this episode to learn more and I hope it helps.
Reinventing the Payphone

Please join our campaign for a better City by reinventing the payphone as part of a design challenge by Mayor Bloomberg, ​the Chief Digital Officer, and DoITT.  Payphones currently generate $17.7 million in annual revenue with $1.2 million from calls and an overwhelming $15.9 from advertising, both of which are shared with the City that receives 36% or $6.3 million.  The contest seeks to rethink design for better aesthetics, sustainability, and new infrastructure to support growing community needs while improving annual revenue.  As the only "tech" candidate for City Council, once elected we will continue to support and pursue innovative contests like these as we rethink the City of New York.  Submissions are due February 18th, with information sessions starting January 23.  You can learn more at nyc.gov/reinventpayphones.
Holiday Party
Thank you to all of you who came out to celebrate the holidays with our campaign for a better city.   Pictures from the event are available on Flickr and Facebook.
New Year's Party 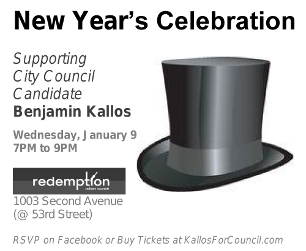 Join us in celebrating the New Year on Wednesday, January 9, 2013 from 7PM to 9PM at Redemption, 1003 Second Avenue (@ 53rd Street).  RSVP on Facebook and Buy Your Ticket Online at KallosForCouncil.com.
First 2013 Filing
Our Primary Election will be this year and we must have a strong public filing this January 11th.  We've cleared the field of multiple opponents based on the strength of our first filing, with one opponent even moving out of the district.  If we don't we will likely see additional opponents.  Your early dollars are a better investment in a campaign that will have an easier election with fewer opponents.
The good news is that once we've raised $75,600 our campaign will be "maxed out" and won't need anymore money for the Primary.  Nearly 350 contributions helped get us almost half way there this summer, please help us get to the finish line and donate again before January 11th.